Trek To The Prehistoric Caves Of Pandava Bakhara 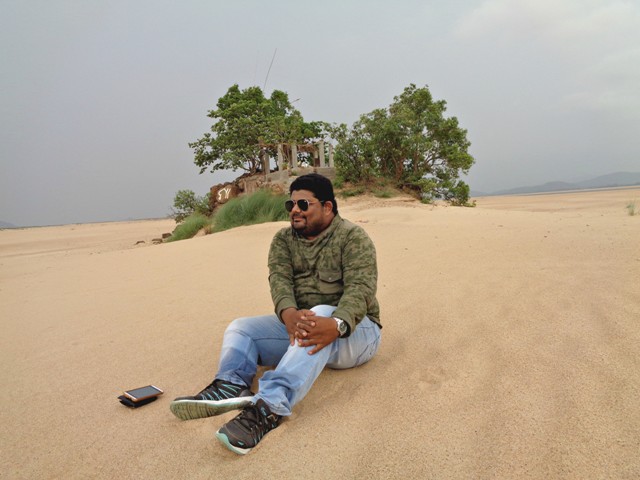 It was such a thrilling Sunday!! I had been roaming around Pathapur village (in cuttack district) in the outskirt of Chandaka forest since last one month, was searching for a cave which preserves murals from early historic period. With two previous unsuccessful attempts, this time I was collaborated with a 23 years old young adventure & heritage enthusiast Subhasish Dash & started to explore this hidden treasure.

By 7. 30AM early in the morning we were at the foot of “Pandava Bakhara” hill which houses the cave at its peak. There is a tribal family that resides under the foot hill of Pandava Bakhara & we were assisted by two young kids Rinku & Nikhil, they took us to the top of the hill guiding us all through jungle & showing us the right path to reach the cave.

According to locals, the rock shelter was the abode of the Pandavas during their exile and hence the shelter is called Pandava Bakhara. People come together at the shelter for festivity during the Rajasankranti each year. The distance of the rock shelter from the ground level is approximately around 1 KM & there is no specific way to reach the top. The slippery path that one needs to take to reach the cave is full of big bushes of wild grasses & thorns. I felt last 150-200 meters were the toughest part of the journey as the route turns more vertical close to the cave. It took us 30-40 minutes to reach the rock shelter.

Few years back a research team found traces of human settlements which they stated as old as 4000 years. They believe that there was human habitat in the hill caves located in the north-west of Chandaka forest. During the three-month long research in the wildlife reserve, the team found ancient stone carvings. The primary statistics revealed the artworks of reptiles, weapons and geometrical signs, these prove that people were living in Pathapur, Kusapangi and Gayalbank areas, 3,500-4,000 years ago around 20 km away from Cuttack.

The artworks found from the site are assumed to be of the new Stone Age and Copper Age. The caves inside the hills have been named as Pandava Bakhara, Diarakhola, tiger cave, Chanchali cave, Kalia Taila cave, Narahari cave and Anahat cave where artworks of copper Stone Age have been found. There is a lake situated adjacent to the hill near the Mahanadi River. It is assumed that there was a civilization near the river during that period. Out of all these, Pandava Bakhara is located at the highest distance from ground level & contains few visible rock arts of ancient period.